Lighter of the Gospel Fires (Book)

Lighter of the Gospel Fires (Book) 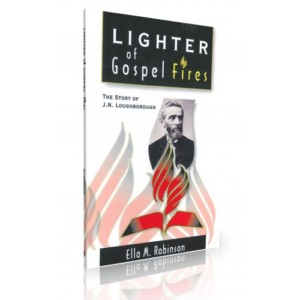 John N. Loughborough lived at a time when men went forth fearlessly to proclaim the three angels’ messages, often traveling from place to place on foot or by borrowed conveyance, not knowing where they were to sleep at night or how they or their families would be fed and clothed. He was born in Victor, New York, a village on the stage line between Albany and Buffalo.

John’s grandfather had been a soldier in General George Washington’s army in the American Revolution. Grandson John remembered the incident of George Washington’s father telling him, “Son, make up your mind that if there are but two men going to heaven, you will be one of them, and live accordingly.”

During his 92 years he lived accordingly to this advice.

Ella May Robinson is granddaughter of James and Ellen White. She was born in California and returned there after living on four continents. She spent part of her childhood in Europe, went to college in Australia, and after her marriage to Dores E Robinson, lived eight years in Africa. She filled the varied roles of colporteur, church school teacher, missionary wife, and mother of two missionaries.

Author of Choma, a Boy of Central Africa, Stars in Her Heart, When Jesus Was Here, Lighter of Gospel Fires–Story of J N Loughborough, Stories of My Grandmother, and S N Haskell, Man of Action.